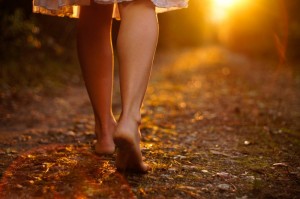 I grew up in Maine, in the northeast corner of New England. As a whole, Mainers pride themselves on being practical people; intellectual dialogue, democratic compassion and love of nature abounds. The concept of ‘religion’ is looked at with some skepticism, though the majority would consider themselves spiritual in some way.

The people are smart and empathetic, and won’t hesitate to offer advise in times of emotional crisis. I came to depend on that insight as as I rode life’s roller coaster of changes. Getting advise from my important people would tip the “decision scale”, and point me off in the right direction.

But somewhere around when I turned 20, the women in my life all decided together (apparently) that I was officially an adult and I had to make my own decisions. The advise changed from, “you should…” or “try this…” to the frustrating new alternative: “Listen to your gut… Your instinct is there for a reason.”

Deep down, I knew this was good thing– they were my decisions to make and I had to make them myself. However, for someone that loved having a girlfriend spell out just what she thought I should do, this did not feel like a positive change. I felt like yelling at them– you’re saying you’re really not going to help me?! Whatever my gut is saying, it’s speaking a different language!!!!

I tried to my very hardest to learn how to listen to my instinct. It took two countries, way too many states and lots of time alone, but I started to hear myself. In case anyone reading doesn’t know how to listen to your gut, here’s a few examples that I’ve learned over the last few years:

When I was 22, I followed my gut out to Wyoming. And then a few years later to Montana. The dominant lifestyle here could not be more different from what I’m used to; Christian, conservative and republican. Wonderful people, by the way. But sometimes when I ask for advise from girlfriends here, I’m still a bit surprised by their answer: “Pray about it… Follow what God is telling you”.

At first, I struggled with this response, because it was so different than what I was used to. To start, I hadn’t actually sat down and prayed about anything in my life. Like ever. I didn’t know how to go about it or if it would even work.

And even worse, I didn’t know what advise I was waiting for and how to listen. I felt like the only thing I would understand would be if God burst through my door said, “HEY! I know what you should do!” Well, hallelujah, at least You do.

It took me a few years, and a lot of thinking. And a lot of praying. And a lot of hesitating and then leaping. But here’s what I’ve come down to: those two statements, to pray about and follow your gut, are the same thing.

Let me explain. I was raised as a Quaker, which is a very liberal sect of christianity. Quakers believe that God lives inside every person, and inter connects everyone to each other. It’s God that acts as your conscious, helps you make hard decisions, and guides you in creating a life that feels like your own.

So as a Quaker, when you pray, you’re not praying to a God far away up in the sky. In reality, you’re praying to the God that lives in side of you, or, in essence… you’re praying to yourself. These two different pieces of advise, to follow your gut or to pray about, become very similar when you think about praying to God as an inner spirit that talks in your own voice.

When put into that light, the advise “listen to your gut”, sounds a lot more like, “talk to God, and wait to hear an answer. It may very well come in the sound of your own voice”. Or an easier translation: listen to your gut = listen to God.

In the same way, “follow your intuition”, sounds more like “God is pushing you in a particular direction. The tug that you have inside might be you, but it also might be God speaking through you in the only way you can understand. So follow that”.

My point is this: whether you strive to follow your gut or follow God, you are, in essence doing the same thing. You’re striving to live a life that’s your own, to create something that feels like it fits you. Understand that the way people talk can use different words, but be saying the exact same thing.

And either way you put it, it’s still the best advice I ever got.